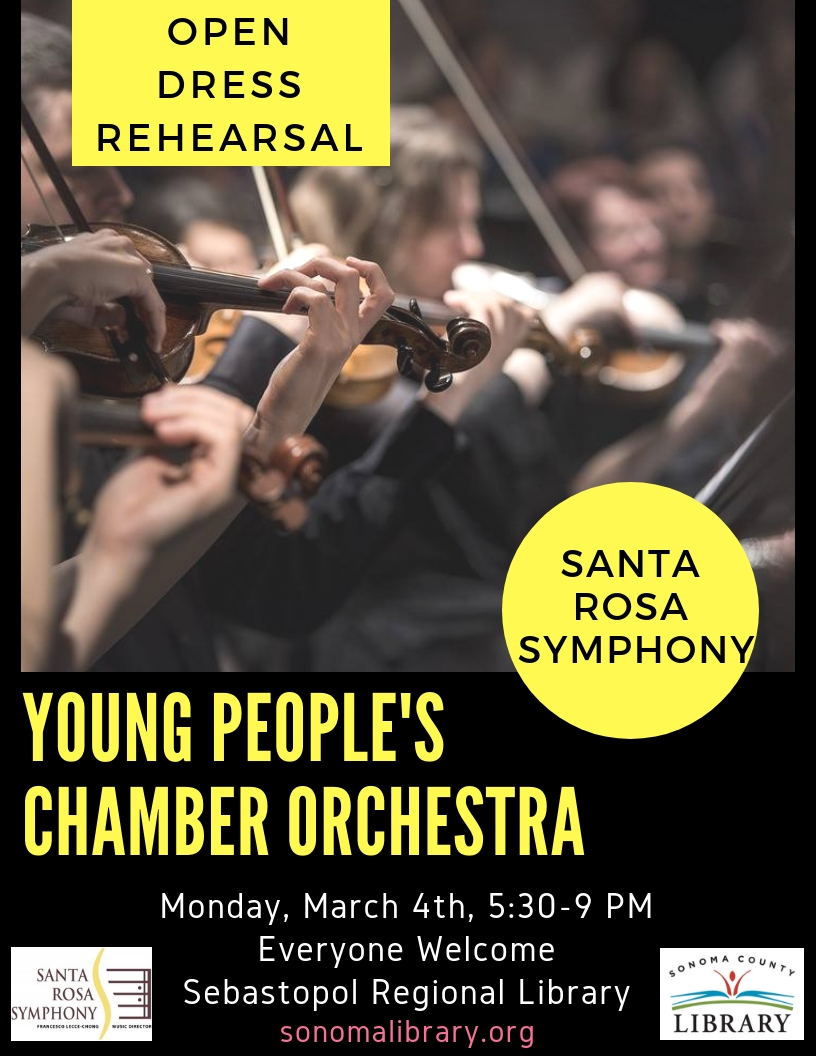 Join us for a delightful evening of music created by some of Sonoma County's most talented young musicians!  The Young People's Chamber Orchestra (YPCO) will hold one of their regularly scheduled rehearsals at the Sebastopol Library.

Patrons of all ages will have the opportunity to see the hard work and dedication that goes into creating music that is performance ready.  This program will be especially inspiring for aspiring young musicians.

The chamber group is directed by Aaron Westman:

Complimented recently for his “impressive playing” and “rapturous music” (Early Music America), Aaron Westman has become "one of the most popular period instrumentalists on the West Coast" (Santa Rosa Press Democrat). In demand as a violinist and violist, he has performed as a soloist and chamber music collaborator with Agave Baroque, American Bach Soloists, El Mundo, Ensemble Mirable, Live Oak Baroque Orchestra, Musica Pacifica, Seicento String Band, Seraphic Fire, and The Vivaldi Project.

Westman is an alumnus of Santa Rosa High School, as well as the Santa Rosa and San Francisco Symphony's Youth Orchestras. He holds a Master of Music from the Indiana University Jacobs School of Music with a double-major in viola performance and early music. His teachers included Stanley Ritchie, Alan de Veritch, Geraldine Walther, and Theodore Arm. For three years, Westman taught at California Institute of the Arts, near Los Angeles.

About his 2013 appointment as Young People’s Chamber Orchestra director, Westman said: "I am honored to accept the position of Director of the Young People’s Chamber Orchestra, and I am humbled to join the list of fine musicians and educators—Linda Ghidossi-Deluca, George Thompson, and Dawn Dover—who have lovingly envisioned, crafted, and maintained this important gem of a program. I am also excited to work with the Education Program's extremely gifted artistic and administrative staff to complement their existing offerings. As I was growing up in Sonoma County, my musical mentors impressed upon me the mantra that chamber music was the highest form of our art, requiring leadership and rhetorical skills, a collaborative and charismatic attitude, a high degree of creativity, and a strong, subtle, and refined technique. I have made my career organizing, directing, performing, and touring with chamber and period instrument ensembles and chamber orchestras. It is a thrill to get to share my love for this art form with a new generation of young musicians and future leaders.”