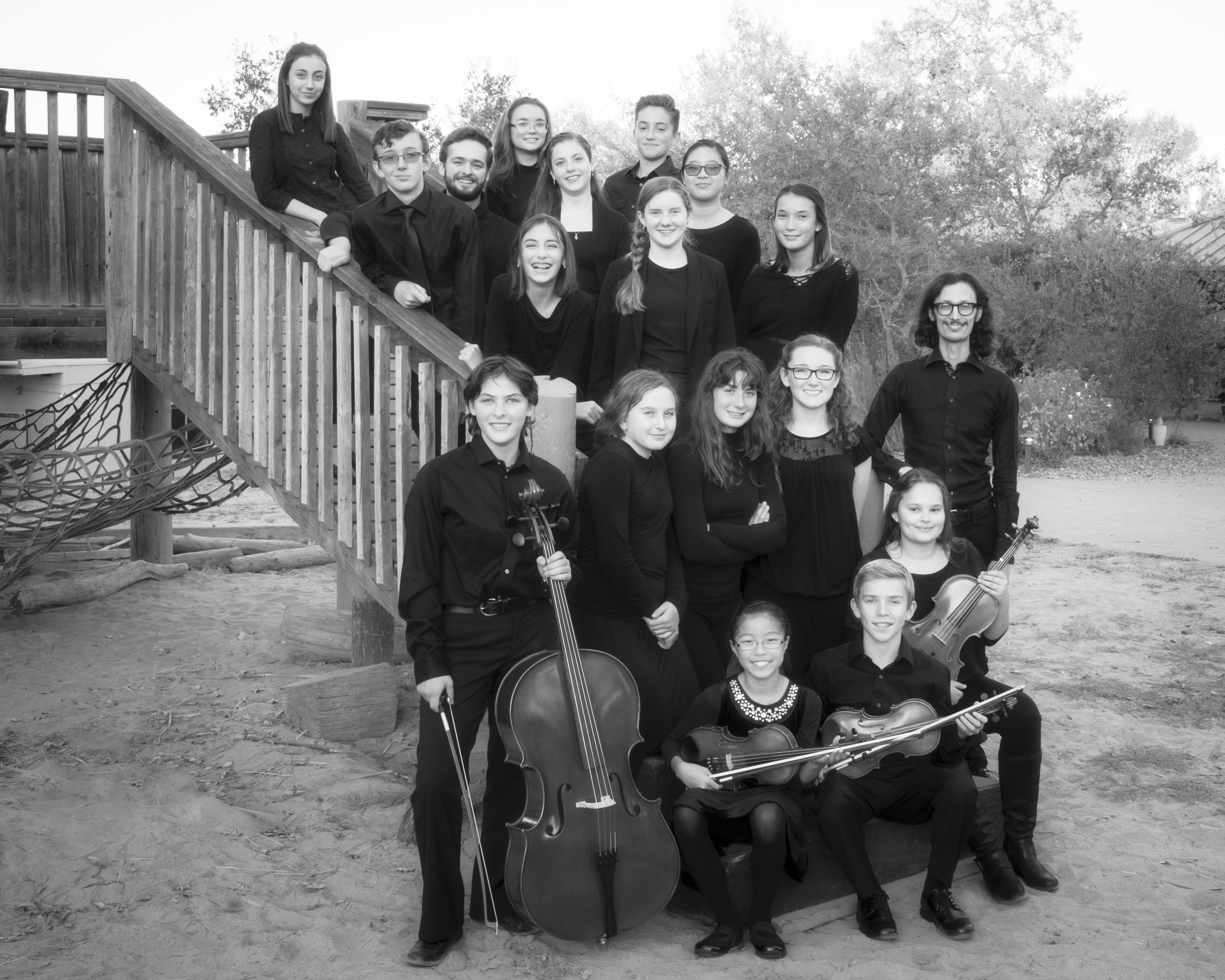 Join us for an exciting evening of music played by some of Sonoma County's most talented young musicians!
This will be an open dress rehearsal of The Young People's Chamber Orchestra, Directed by Aaron Westman.
Program Below:
“Nautilus Music: the spiraling, cyclical nature of music”
Edvard Grieg
Suite from the time of Holberg
Alexander Glazunov
5 Novelettes
Giovanni Bottesini
Double Bass Concerto no. 2 in B minor
12' i. and ii. only
Frank Martin
7' Pavane couleur du temps
Heinrich Ignaz Franz Biber
Fidicinium sacro profanum
7' Sonata no. 4 in d minor
Lewis Patzner
String Symphony
3' ii. Slow-limbo
10' Collaborative composition
Lewis Patzner, guest composer/performer
More information about YPCO :
The Young People's Chamber Orchestra, a string orchestra working without a conductor, is designed to take accomplished young string players and mold them into high-functioning musicians with a complete attentiveness to detail and to each other within the context of the music. The director trains the musicians to interact and collaborate on high-level music-making and nuanced performance. This orchestra is for students up to 23 years of age who are studying privately and have had previous orchestral training. It is modeled after the Bay Area's renowned New Century Chamber Orchestra and is the first youth ensemble of its kind in northern California. All members of the Young People's Chamber Orchestra must be enrolled in another of the Santa Rosa Symphony ensembles or their school's orchestra and must be committed to a strict routine of rehearsals, private lessons, and at-home practice. Established in 1998, the Young People's Chamber Orchestra was formed under the direction of Linda Ghidossi-DeLuca, who led this ensemble until 2008. Currently, under the direction of Aaron Westman, the orchestra has been featured as a guest on a New Century Chamber Orchestra performance and has been a winner of the Berkeley Junior Bach Festival.
(http://srsymphony.org/Education-Community/Training-Young-Musicians/Young-People-S-Chamber-Orchestra)
More information about Aaron Westman:
Complimented recently for his “impressive playing” and “rapturous music” (Early Music America), Aaron Westman has become "one of the most popular period instrumentalists on the West Coast" (Santa Rosa Press Democrat). In demand as a violinist and violist, he has performed as a soloist and chamber music collaborator with Agave Baroque, American Bach Soloists, El Mundo, Ensemble Mirable, Live Oak Baroque Orchestra, Musica Pacifica, Seicento String Band, Seraphic Fire, and The Vivaldi Project. As a principal player, Westman has worked with ABS, Berkeley West Edge Opera, Bach Collegium San Diego, Pacific Bach Project, Jubilate, and Magnificat Baroque Orchestra, and he performs regularly with New Hampshire Music Festival, Musica Angelica, Orchester Wiener Akademie, and Philharmonia Baroque Orchestra. Westman also co-directs the award winning chamber ensembles Agave Baroque and Live Oak Baroque Orchestra. Agave was a finalist in the Early Music America Baroque Performance Competition in 2012, as well as a finalist in the EMA/NAXOS Recording Competition, and was a featured main stage performer at the 2012 Berkeley Early Music Festival. Both ensembles have received recent recording grants from the San Francisco Friends of Chamber Music. Westman has recorded for Hollywood, and on the Dorian/Sono Luminus, Magnatune, NCA, VGo, and (GRAMMY Nominated) Philharmonia Baroque Productions labels, as well as live on KPFK (Los Angeles), WDAV (North Carolina), ORF (Austria), and as a soloist on NPR's Harmonia and Performance Today radio programs. Westman tours extensively worldwide, including with two projects starring the actor John Malkovich. Recent tours have taken Aaron to Austria, Brazil, Canada, Chile, Colombia, Germany, Italy, Peru, Spain, and all over the United States. Westman is an alumnus of Santa Rosa High School, as well as the Santa Rosa and San Francisco Symphony's Youth Orchestras. He holds a Master of Music from the Indiana University Jacobs School of Music with a double-major in viola performance and early music. His teachers included Stanley Ritchie, Alan de Veritch, Geraldine Walther, and Theodore Arm. For three years, Westman taught at California Institute of the Arts, near Los Angeles. About his 2013 appointment as Young People’s Chamber Orchestra director, Westman said: "I am honored to accept the position of Director of the Young People’s Chamber Orchestra, and I am humbled to join the list of fine musicians and educators—Linda Ghidossi-Deluca, George Thompson, and Dawn Dover—who have lovingly envisioned, crafted, and maintained this important gem of a program. I am also excited to work with the Education Program's extremely gifted artistic and administrative staff to complement their existing offerings. As I was growing up in Sonoma County, my musical mentors impressed upon me the mantra that chamber music was the highest form of our art, requiring leadership and rhetorical skills, a collaborative and charismatic attitude, a high degree of creativity, and a strong, subtle, and refined technique. I have made my career organizing, directing, performing, and touring with chamber and period instrument ensembles and chamber orchestras. It is a thrill to get to share my love for this art form with a new generation of young musicians and future leaders.”
(http://srsymphony.org/Artists/Aaron-Westman)